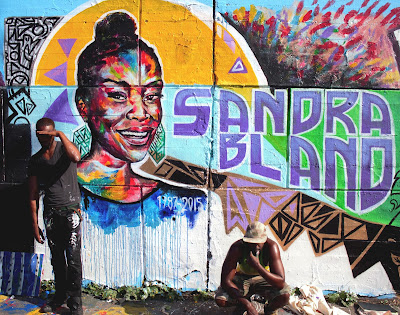 I'm an artist. I dont claim to be an activist. When BlakColletiv took action and wrote #blacklivesmatter on the wall I wasn't there, except in spirit...the fallout was shocking to some, predictable to others, sad to many...you can (and should for the context of this note) read about it all here...I wont go into detail on it but my brother in art Allan Andre and I decided to paint this piece in response to that whole situation, to keep positivity flowing while redirecting the conversation back to the topic, but the whole thing has left a bad taste in many mouths, and there's still a lot left unsaid...so I'm just going to put this out there... these are just MY personal thoughts about the matter...

First off I'm glad people are digging the Sandra Bland mural, but the reality is I would have been happier if I never had to hear about her like this in the first place, and she was still alive on her path to fight against discrimination in the Southern states. Sandra Bland is only one of the latest, but the list of victims of this kind of violence is endless and continues to grow...not to take any of her/their humanity away or diminish the loss, but we have hundreds and hundreds of Sandra Blands...

The list can, and still does, go on and on, stretching back decades...each violent, senseless death seared into black conciousness and etched into collective memory, a pattern of assault and war against black bodies and lives that continues with little relative change...I still remember watching the news about Rodney King, Amadou Diallo and the sickness I felt hearing about Abner Louima, and that was when I was in my early-mid teens in the 90's...yet every day, every week, every month, year after year, the list grows and grows...its unacceptable and to be quite honest, intolerable at this point...the frustration is real.

Please understand how traumatic that is to one's psyche, and to a people...we carry that pain collectively because its not an isolated incident, it could be any one of us pulling out a wallet or phone, or or changing lanes without signalling, or walking down the street eating skittles and getting killed for it...these people died because of what they were, not who they were...when we say #blacklivesmatter this is what we're talking about...and I dont speak for the movement, this is just my experience...All thanks should go to Alicia Garza and Patrisse Cullors and Opal Tometi for putting this out there first...but All Black Lives Matter. Black Women's lives..Black Teenager's lives...Black Queer and Trans lives...Black Convict lives...they all matter and shouldn't be disposable.

The media does smear campaigns against black victims of violence to make their character seem questionable, and therefore their lives disposable and their deaths somewhat justifiable. Innocent people are dying, and they're looking for grey areas. We've seen this time and again...if you really don't know whats going on, then do some research, this isn't just about the police or an American problem, black people here in Canada are over-policed (have you read about carding in the GTA for example), over-represented in the prison system, discriminated against in schools and workplaces, misrepresented in the media...and even if it was only in America, injustice somewhere is injustice everywhere...this thing won't solve itself and the onus isnt on the victims alone to make the change...

If you're in a privileged enough position to feel like it isn't your problem, not knowing is one thing...but wilful ignorance is another. Hear Us! And decide which side of history you want to be on...and if you want to be an ally then listen, give room for people to speak, learn how not to prioritize your feelings over the bigger picture, don't dilute or distort the message, stand with us, speak out and take a stand of your own...because we shouldn't always have to instigate these things...silence is compliance...Members of Parliament and the Canadian government which has such intimate ties to the US could also take a stand against what is essentially a Human Rights issue...this is a grassroots movement but the change needed is systemic.

With that said, I thank those people who have shown what real allyship can look like ...bloggers, people on instagram and social media who are openly discussing these things...who commented on their own about the #blacklivesmatter statement on the wall being erased and denounced the degrading messages that went along with it, and artists who used their art to cover up the resulting poorly thought out response, sending messages in support and hanging out while we painted, letting us know all people in the graff community didnt feel the same way and that we were welcome...because TechWall is more than the chill spot for the few...its a platform, and a public one at that..and having a platform is a privilege...so to those allies I mentioned and others, keep setting an example by using your relative power/privilege/platform in solidarity with the people.

And of course I have to thank the Ottawa BlakCollectiv, because whether people liked it or not, your art and statement were powerful and disruptive, people took notice and the conversation is happening. I'm making this blogpost public, and it would be niave to think everybody reading this will be supportive...after all, thats why I'm writing this in the first place....to those folks, if you've managed to get this far I say again, choose what side of history you want to be on...because this is not stopping til the killing stops.

Rest in Power Sandra Bland and all the people taken unjustly before their time.
#blacklivesmatter 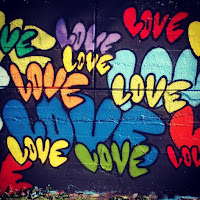